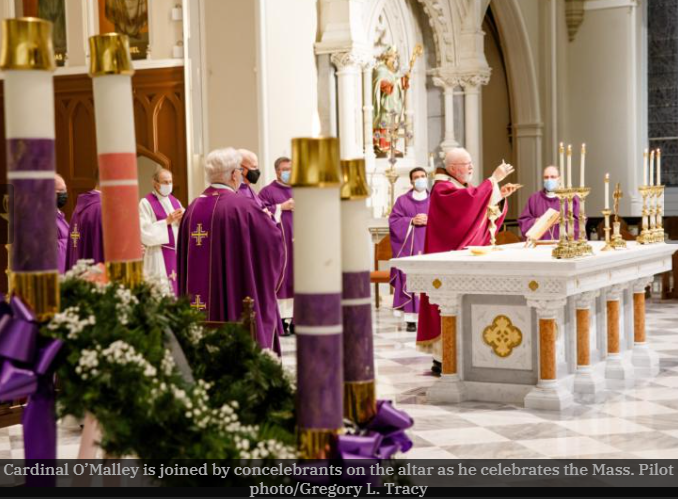 As the global Church began its new liturgical year, a Mass celebrating the initiation of the “synodal way” took place at the Cathedral of the Holy Cross on Nov. 27, marking the official opening of the synodal year on the diocesan level.

Cardinal Seán P. O’Malley was the main celebrant of the vigil Mass of the first Sunday of Advent. Among the concelebrants were the archdiocese’s local coordinators for the synod: Bishop Robert Reed, auxiliary bishop for the West Region and president of CatholicTV, and Father Paul Soper, archdiocesan secretary for Evangelization and Discipleship.

Invited guests included members of the Archdiocesan Pastoral Council, who will play a significant role in the synodal process.

In his homily, the cardinal noted that the cycle of Sunday Mass readings would now feature the Gospel of Luke, which depicts Jesus traveling on a long journey to Jerusalem.

“It is very fitting that in this new year, Pope Francis is inviting all of us to be part of a journey together that he describes as a synodal journey,” Cardinal O’Malley said…

Mass marks beginning of synodal process in Archdiocese of Boston
×