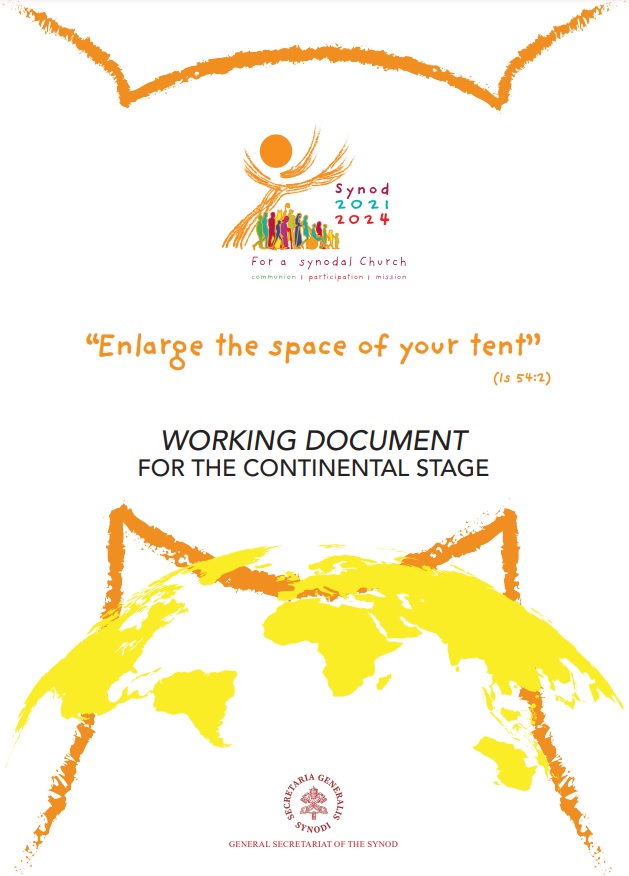 On October 27, 2022, the Working Document for the Continental Stage was presented at a press conference at the Vatican’s Holy See Press Office. The Working Document for the Continental Stage is the fruit of the Syntheses resulting from the consultation of the People of God in the first phase of the synodal process.  The document will serve as the framework for the continental phase of the church’s ongoing synod process, which will involve ecclessial gatherings on every continent over the next six months, ahead of two assemblies that will be held in Rome in October 2023 and October 2024.

The document, titled “Enlarge the Space of Your Tent” (the Lord’s command to the people of Israel in the Book of Isaiah) was produced by a team of 30 advisors who gathered in Frascati, Italy for two weeks in late-September and early October, the majority of whom were lay Catholics.  It is the result of a group reflection on the syntheses of synod discussions submitted by 112 out of 114 episcopal conferences from around the world, all the Eastern Catholic Churches and Vatican departments, religious and lay Catholic associations as well as online “Digital Synod” consultations.

According to a recent article in America magazine, “Two of the issues raised most often in reports sent to the Vatican were the need to respect and value the contributions women make to the church and the need to face ‘the impact of a lack of trust and credibility resulting from the abuse crisis.'”

Please take some time to read the Working Document for the Continental Stage – you will find many of the major themes that were central in our own SJSP Collaborative Synod Synthesis Report are reflected in the document.

More articles on the document and the ongoing Synod:

I helped write the first global synod document. Here’s what we heard from Catholics around the world (America)

Synod News: Document for the Continental Stage Released
SHARE THIS:
×