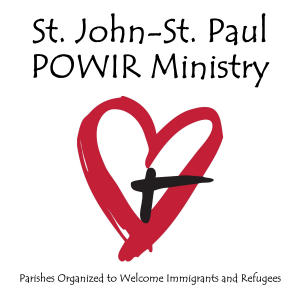 During the first three weeks of Lent, we have presented information about refugee resettlement and the work of the SJSP Collaborative to support refugee resettlement in partnership with Catholic Charities of the Boston Archdiocese. Our work is ongoing. Despite the challenges of coping during a world-wide pandemic, POWIR volunteers have responded at every possible opportunity to meet the needs of our most recent family, the Rwamuhindas, as well as that of the Congolese and Honduran families who came before. We remain committed to ensuring a full and independent integration for the Rwamuhindas. For your role in making this complete commitment possible, we thank you.

Worldwide the population of forcibly displaced refugees is estimated at more than 26 million. That number continues to grow as humanitarian crises displace more and more people, around the world, including in Africa, Central America, Asia and the Middle East. A ray of hope emerges for future efforts of all agencies in this country devoted to refugee resettlement. The US government has returned to a more humanitarian focus, opening resettlement options again to thousands of Syrians, Somalis and Iranians. At the same time, it has announced a significant increase in the
annual cap on the number of refugees admitted to the U.S.A. under the U.S. Refugee Admissions Program (USRAP) up from a cap of 18,000 last year to 125,000 in the next fiscal year. These are encouraging signs for all who are committed to supporting refugees.

While the collection will be taken up in both churches on the weekend of March 20-21, we are expanding the opportunity to give to include the whole Lenten season. You may do so anytime by an online donation or by sending a check to your parish office. Please mention in the memo section that the check is for the 2021 Lenten Gift.  Thank you very much.

Our Lenten Gift Story Week 3: The Road Ahead
SHARE THIS:
×