We made it to our early breakfast and then headed straight out to the Kraków Arena which has been renamed as the “Mercy Centre” for World Youth Day. All the events here throughout the week are being hosted by The Knights of Columbus.  The whole city is full of catchesis sites which are divided by language and catchesis is provided for today and the next two days.  We took a train to get here – all public transport is free with our WYD passes. 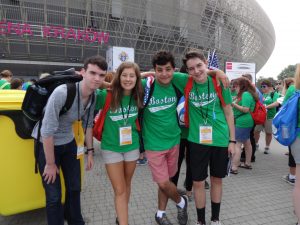 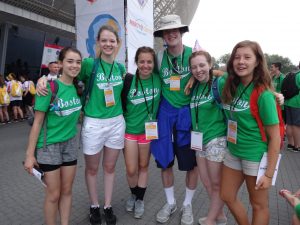 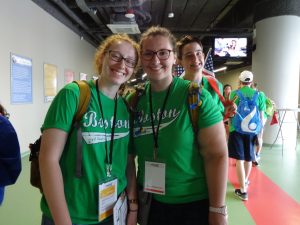 There were speakers and events organized for the whole day today starting with Sr. Bethany Madonna of the Sisters of Life. Sr. Bethany gave us a lovely witness about how each of us is uniquely made through the work of God’s hands and that we should continue to remain open to His call, whatever it may be.

Our own Cardinal Sean also talked to us about how mercy is the answer that God has given the world. All the talks this morning focused on Mercy, respect for life and love for one another.

Cardinal Sean was also was the chief celebrant at Mass at the end of the morning. 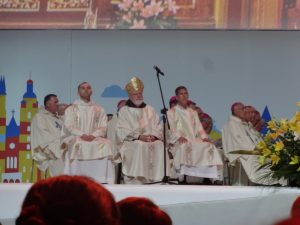 Later in the day we heard from a panel of speakers on the theme of religious liberty including Archbishop Lori who is the Supreme Chaplain of the Knights of Columbus. The speakers talked about the persecution of the Church around the world and emphasized the need to take on the challenge of speaking out against the persecution of Christians in Iraq and throughout the Middle East.

Around the walls of the Centre are picture of Martyrs for the faith who are our WYD saints. 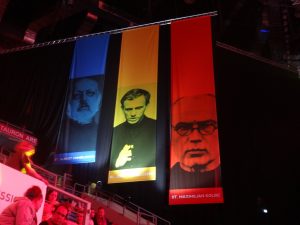 A great highlight of the day was when the footage of Pope Francis’ plane arriving in Kraków was shown on the screen in the arena.

Sections of the stadium were reserved for confessions and there was a constant stream of pilgrims receiving the sacrament through the day and especially in the evening.

The day ended with the event we were all most excited about which was a concert and adoration with Matt Maher, Audrey Assad and Bishop Robert Barron.

The Arena holds 18,000 people and was filled to capacity with another 2,000 people outside. 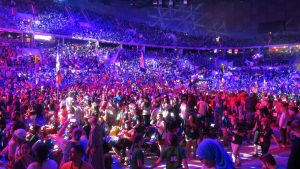 It was an amazingly joyful atmosphere which became so prayerful and reverent during adoration. 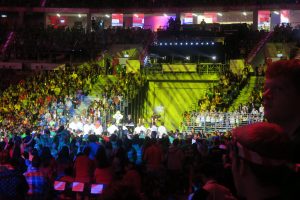 After the day’s events were over we walked the 2 miles back to the hotel. The evening air was cool and it was great to walk after a day of mostly sitting today.